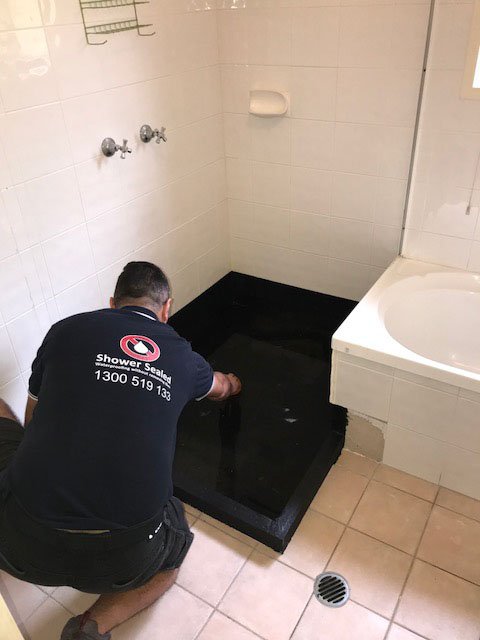 that penetrates through the surface of the shower tiles and grout lines.  It acts much like a bucket under your shower and should protect the surrounding areas of your dwelling from water damage.

The traditional way of fixing a leaking shower waterproofing membrane obviously involves ripping up all the tiles and re-applying the shower waterproofing membrane then retiling and sealing the shower. This method is definitely effective if done correctly and offers a long-term solution to the problem. However, the downside of this method is that it does take roughly 5 days to complete and is expensive in comparison to our Ultra Bond Technology system. It can also be difficult trying to find matching tiles when re-tiling.

Overall our goal with our  Ultra Bond Technology is to save you the time money & hassle of removing tiles if possible.

Should we determine that the shower does need to be re-waterproofed and tiled then we always follow Australian Waterproofing Standards.

Shower Sealed is a leader in shower waterproofing without removing tiles, we cover all of Brisbane, Ipswich,  Logan, Gold Coast, Tweed Heads, Tweed Coast through to Byron Bay.

All waterproofing, tiling, and or shower renovation services are quoted on a per area basis, please book in your free on site inspection today